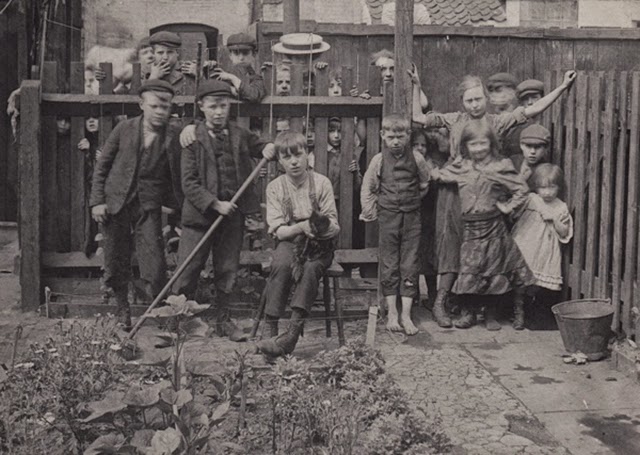 Wikipedia describes Spitalfields in the late 19th century as follows:

By the later 19th century inner Spitalfields had eclipsed rival claimants to the dubious distinction of being the worst criminal rookery of London with common lodging-houses in the Flower and Dean Street area being a focus for the activities of robbers and prostitutes. The latter street was dubbed in 1881 as being “perhaps the foulest and most dangerous street in the metropolis”. Another claimant to the distinction of being “the worst street in London” was nearby Dorset Street, which was highlighted by the brutal killing and mutilation of a young woman named Mary Kelly in her lodgings here by the serial killer known as Jack the Ripper in the autumn of 1888.

This is where the children in these pictures lived. There are signs of hardship and unhappiness. Some of the children are obviously working. Many of them have bare feet. But there are also smiles and playfulness. Children can be remarkably resilient and even in the harshest of conditions life goes on. Although too much poverty still remains, thankfully the worst excesses of Victorian London are now behind us (I hope).