Or at least through an opening that once was a window.

Northgate, once the estate of Edward J. Cornish and his wife Selina now stands in ruins in the woods just north of Cold Spring, NY.

Atlas Obscura provides the following information (in: Ruins of the Cornish Estate):

Starting at one of the country’s most beautiful train terminals, Grand Central Station, the Metro North Railroad runs alongside the Hudson River, one of the country’s most breathtaking train journeys. About an hour into the Hudson Valley is the charmingly small town of Cold Spring. As delightfully quaint now as it was in 1917, it attracted newlyweds Edward Joel Cornish and Selina Bliss Carter Cornish. The lovers decided to move out of the city and into an estate in the woods just north of town.

Cornish was the president of the National Lead Company, and furnished a grand estate consisting of a mansion, swimming pool, gardens and other outbuildings. The couple lived, loved, and entertained visitors frequently, throwing lavish parties and filling the rooms of the mansion with friends and laughter.

Sadly, in May of 1938 tragedy struck when the life-long lovers died within two weeks of each other. Once a dream home, the mansion and the grounds fell into disrepair, and in 1958, a fire destroyed most of the mansion leaving the Cornish’s grand estate in ruins.

Today those ruins are overgrown and gradually have been reclaimed by the forest. They can be found by a 4 mile hike into the woods. Standing amidst the fallen down debris, it’s easy to imagine the motorcars pulling into the driveway, the well-to-do passengers excited for a weekend away from the city, the servants carrying monogramed suitcases into the mansion, champagne glasses tinkling on the lawn and the sounds of laughter coming from the swimming pool, where now there is only silence.

I’ve posted a couple of times before about Northgate:

This is the way it looked in its heyday: 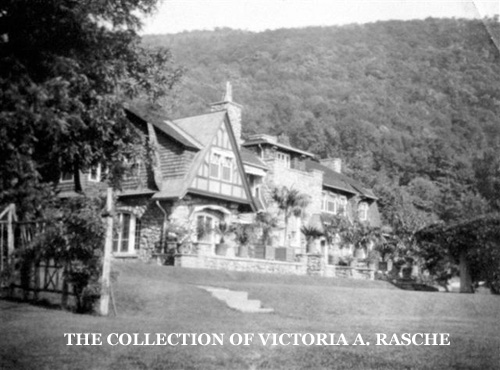 The Cornish mansion, from the northwest. The house was an eclectic mix of both Shingle-style and Tudor-revival architecture. Unsuspectingly, a small porch existed above the west wall, the wall punctuated by the tall round-arched window. Source: Hudson Valley Ruins: Northgate, historic photographs from the collection of Victoria A. Rasche