In an earlier post I mentioned that most of the gravestones were unadorned i.e. they only had text in the form of names and inscriptions. However, I did come across a few with symbols such as the one above with a weeping willow. The Engraved: The Meanings Behind Nineteenth-Century Tombstone Symbols website gives it’s meaning as follows:

Carvings of weeping willows became very prevalent on gravestones in the early 19th century. Use of this graceful symbol reflected the young United States’ growing interest in ancient Greece. Beginning in 1762 with the publishing of The Antiquities of Athens by Stuart and Revett, which produced the first accurate surveys of ancient Greek architecture, Great Britain, Europe and eventually the United States began copying Greek style in architecture and interiors. This emulation even carried over into funerary art. For the United States, the comparison between ancient Greece and its democracy with the former colonists’ “grand new experiment” in government was inspiration for copying everything Greek.

Gravestone carvers created weeping willows alone or with Greek-inspired urns, obelisks, or monuments. The most obvious meaning of a weeping willow would seem to be the “weeping” part…for mourning or grieving for a loved one. The saying “she is in her willows” implies the mourning of a female for a lost mate. And while the Victorians took the art of mourning to new heights, the weeping willow was not just a symbol for sadness.

A native of Asia, the weeping willow is a fast growing tree that can reach fifty feet high and fifty feet wide. It tolerates most any soil and roots easily from cuttings. Because of this, they are often the first trees to appear in a disturbed site, giving them a reputation as “healers and renewers.” In many cultures, the willow is a sign of immortality, and is associated with the moon, water and femininity. The weeping willow also has connections to Greece as Orpheus, their most celebrated poet, carried willow branches with him on his journey through the Underworld. The Greek sorceress Circe planted a riverside cemetery with willow trees, dedicated to Hecate and her moon magic. It was common to place willow branches in the coffins of the dead, and then plant young saplings on their graves, with the belief that the spirit of the dead would rise up through the tree.

This one seems to combine two symbols: Ivy, which because it is evergreen is associated with immortality and fidelity and a broken bud, which is commonly found on the grave of a child or of someone who died an untimely death.

And here’s a delightful one I missed and later came across during my research: 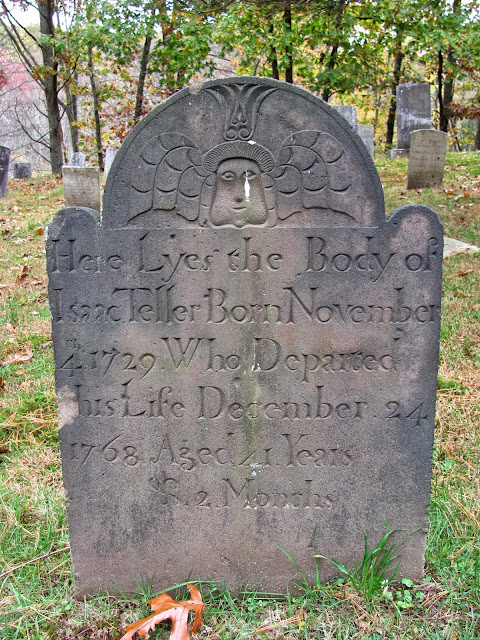 An article (Iconography of gravestones at burying grounds) on the City of Boston website sheds some light on this winged cherub symbol:

By the 1690s, another iconographic motif began to appear on Boston’s gravestones. Called a winged cherub or a soul effigy, this motif was characterized by a fleshy face, life-like eyes, and an upwards-turned mouth. Some historians and students of material culture have asserted that the greater use of winged cherubic images, which have been interpreted as a symbol for the soul’s flight to heaven, was indicative of changing religious sentiments. This theory asserts that changing religious philosophies led to greater acceptance and more widespread usage of symbols forbidden because they were considered to be “graven images.” After much research, however, historians and statisticians have discovered that as a motif the cherub never truly displaced the death’s head. Moreover, this shift from death’s head to cherubic imagery did not correspond chronologically with any of the religious movements of the eighteenth century. Both death’s head and cherub were widely employed motifs well into the late-eighteenth century, although the death’s head appears more often on Boston stones than cherubs.